Scientists and astronomers from Central Asia 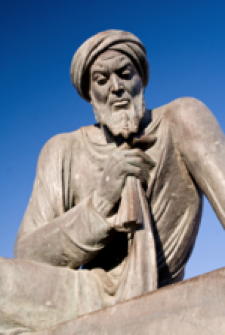 Statue of al-Khwarazmi at Khiva

He was a Persian mathematician, astronomer and geographer during the Abbasid Caliphate, a scholar in the House of Wisdom, Academy of Sciences located in Baghdad.

formerly Latinized as Algoritmi, was In the 12th century, Latin translations of his work on the Indian numerals introduced the decimal positional number system to the Western world. Al-Khwārizmī’s The Compendious Book on Calculation by Completion and Balancing presented the first systematic solution of linear and quadratic equations in Arabic. In Renaissance Europe, he was considered the original inventor ofalgebra, although it is now known that his work is based on older Indian or Greek sources. He revised Ptolemy‘s Geography and wrote on astronomy and astrology.

Some words reflect the importance of al-Khwārizmī’s contributions to mathematics. “Algebra” is derived from al-jabr, one of the two operations he used to solve quadratic equations. Algorism and algorithm stem from Algoritmi, the Latin form of his name.[6] His name is also the origin of (Spanish) guarismo[ and of (Portuguese) algarismo, both meaning digit.

Al-Khwārizmī’s contributions to mathematics, geography, astronomy, and cartography established the basis for innovation in algebra and trigonometry. His systematic approach to solving linear and quadratic equations led to algebra, a word derived from the title of his 830 book on the subject, “The Compendious Book on Calculation by Completion and Balancing”.

Astronomer (800/805-870), born at Ferghana in Sogdiane (modern Uzbekistan), one of the most famous astronomers in the 9th century. He is also known as Al-Fraganus in the West.

He was involved in the calculation of the diameter of the Earth by the measurement of the meridian arc length, together with a team of scientists under the patronage of al-Ma’mūn in Baghdad. Later he moved to Cairo, where he composed a treatise on the astrolabe around 856. There he also supervised the construction of the large Nilometer on the island of al-Rawda (in Old Cairo) in the year 861.

He was born in the outer district of Kath, the capital of the Afrighid dynasty of Khwarezm (now in Uzbekistan)] (or Chorasmia).

Al-Biruni is regarded as one of the greatest scholars of the medieval Islamic era and was well versed in physics, mathematics, astronomy, and natural sciences, and also distinguished himself as a historian, chronologist and linguist. He was conversant inKhwarezmian, Persian, Arabic, Sanskrit, and also knew Greek, Hebrew and Syriac. He spent a large part of his life in Ghazni in modern-day Afghanistan, capital of the Ghaznavid dynasty which was based in what is now central-eastern Afghanistan. In 1017 he traveled to the Indian subcontinent and authored “Tarikh Al-Hind” (History of India) after exploring the Hindu faith practiced in India. He is given the titles the “founder of Indology“. He was an impartial writer on custom and creeds of various nations, and was given the title al-Ustadh (“The Master”) for his remarkable description of early 11th-century India.[9] He also made contributions to Earth sciences, and is regarded as the “father of geodesy” for his important contributions to that field, along with his significant contributions to geography. He wrote an extensive commentary on Indian astronomy in theKitab ta’rikh al-Hind, in which he claims to have resolved the matter of Earth’s rotation in a work on astronomy that is no longer extant, hisMiftah-ilm-alhai’a (Key to Astronomy).

He carried on a lengthy correspondence and sometimes heated debate with philosopher and doctor Ibn Sina (Avicenna). 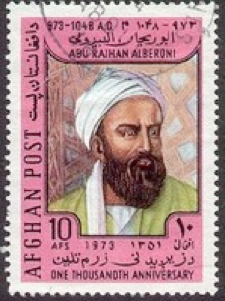 Mathematician and astronomer (born in 940 – dead in 1000), born in Khujand (modern Tajiskistan).

Khujandi worked under the patronage of the Buwayhid Amirs at the Observatory near Ray, Iran, where he is known to have constructed the first huge mural sextant in 994 AD, intended to determine the Earth’s axial tilt (“obliquity of the ecliptic”) to high precision.

He determined the axial tilt to be 23°32’19” for the year 994 AD. He noted that measurements by earlier astronomers had found higher values (Indians: 24°; Ptolemy 23° 51′) and thus discovered that the axial tilt is not constant but is in fact (currently) decreasing. His measurement of the axial tilt was however about 2 minutes too small, probably due to his heavy instrument settling over the course of the observations.

This sextant, with diameter of 40m, served as model to the Observatory of Samarkand, 4 centuries later. 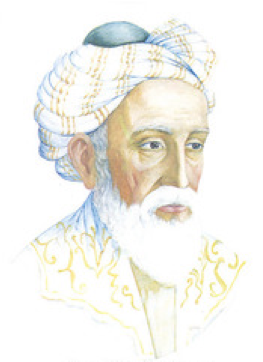 Mathematician and astronomer (1048 – 1131), Born in Nishapur, in Persia (modern northeastern Iran) and at a young age he moved to Samarkand and obtained his education there..

He was a Persian mathematician, astronomer, philosopher, and poet, who is widely considered to be one of the most influential scientists of the middle ages. He wrote numerous treatises on mechanics, geography, mineralogy and astronomy.

Afterwards he moved to Bukhara and became established as one of the major mathematicians and astronomers of the Islamic Golden Age. He is the author of one of the most important treatises on algebra written before modern times, the Treatise on Demonstration of Problems of Algebra (1070), which includes a geometric method for solving cubic equations by intersecting a hyperbola with a circle. He contributed to a calendar reform.

Scholars believe he wrote about a thousand four-line verses or rubaiyat. He was introduced to the English-speaking world through theRubáiyát of Omar Khayyám, which are poetic, rather than literal, translations by Edward FitzGerald (1809–1883).

“This celestial wheel suspended our eyes
Magic Lantern is amazing sight.
The environment, the sun lights the lantern,
And we turn around, bewildered images. “

He left Turkey under the Timur’s power and arrived in Samarkand in 1410 where he became Professor of Ulugh Beg, before teaching in Madrasa and then was in charge of the new observatory in Samarkand.
Qadi Zada ​​al-Rumi was a prominent mathematician.

Mathematician and astronomer. Born in Kashan (modern Iran) in 1380 – dead 1429 in Samarkand

He made his first astronomical observations (lunar eclipse in 1406 AD) and wrote his first treatises in Persian on the subject.

He wrote in 1417 AD the astronomy treatise “It Khanid Zij” for the Ulug Beg’s library that he joined in Samarkand.

Al-Kachi played an important role either in the design of the observatory in Samarkand, opened to 1429, or in its astronomical instruments. Previously, observations of the sky were performed at the madrasa.

He also wrote the description of the technology of building astronomical observation instruments and several mathematical works (including a mathematical encyclopedia) and calculated the number PI to 16 decimal. 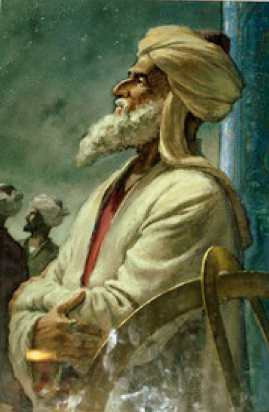 He was a grandson of the great conqueror, Timur (Tamerlane) (1336–1405), and the oldest son of Shah Rukh, both of whom came from the Turkicized Barlas tribe of Transoxiana (now Uzbekistan). His mother was a noblewoman named Goharshad, daughter of the representative Turkic of tribal aristocracy Giyasitdin Tarhan. Ulugh Beg was born in Sultaniyeh in Persia during Timur’s invasion.

At sixteen-year-old Ulugh Beg became his governor in Samarkand in 1409.

Between 1417 and 1420, he built a madrasa (“university” or “institute”) first in Bukhara and then on Registan Square in Samarkand (currently in Uzbekistan), and he invited numerous Islamic astronomers and mathematicians to study there, like Qadi-zadeh Roumi, al-Kachi and Ali Quchtchi

His own particular interests concentrated on astronomy, and, in 1428, he built an enormous observatory, called the Gurkhani Zij, similar to Tycho Brahe‘s later Uraniborg as well as Taqi al-Din‘s observatory in Istanbul. Lacking telescopes to work with, he increased his accuracy by increasing the length of his sextant; the so-called Fakhri sextant had a radius of about 36 meters (118 feet) and the optical separability of 180″ (seconds of arc).

Using it, he compiled the 1437 Zij-i-Sultani of 994 stars, generally considered[who?] the greatest star catalogue between those of Ptolemy and Brahe, a work that stands alongside Abd al-Rahman al-Sufi‘s Book of Fixed Stars. 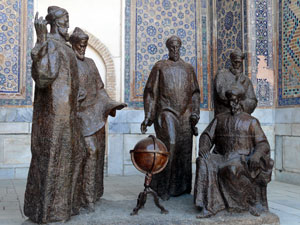 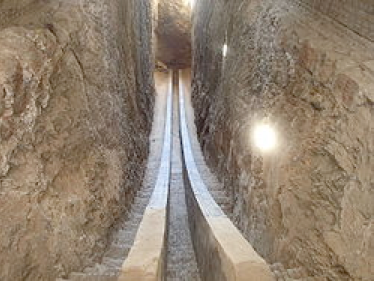 Physician and doctor born in 980 in Afšana, a village near Bukhara (in present-day Uzbekistan), the capital of the Samanids, a Persian dynasty in Central Asia and Greater Khorasan.

It seems that he was precocious in his interest to sciences and medicine. According to his autobiography, Avicenna had memorized the entire Quran by the age of 10. He learned Indian arithmetic.

As a teenager, he was greatly troubled by the Metaphysics of Aristotle, which he could not understand until he read al-Farabi‘s commentary on the work.[17] For the next year and a half, he studied philosophy, in which he encountered greater obstacles.

He turned to medicine at 16, and not only learned medical theory, but also by gratuitous attendance of the sick had, according to his own account, discovered new methods of treatment. The teenager achieved full status as a qualified physician at age 18,[23] and found that “Medicine is no hard and thorny science, like mathematics and metaphysics,

His works cover the entire breadth of knowledge of his time:
logic, linguistics, poetry;
physics, psychology, medicine, chemistry;
mathematics, music, astronomy;
moral and economy;
metaphysical
Crossed from the twelfth to the seventeenth century in Europe brought back The Canon of Medicine, which influenced the practice and teaching of Western medicine.
Avicenna stands out in the fields of ophthalmology, obstetrics and gynecology and psychology. It attaches much to the description of symptoms, describing all the diseases listed at the time, including those in psychiatry.
• It is the first to distinguish pleurisy, mediastinitis and subphrenic abscess.
• It describes the two forms of facial paralysis (central and peripheral)
• It gives the symptoms of diabetes.
• He can make the differential diagnosis between pyloric stenosis and stomach ulcer.
• It describes different varieties of jaundice.
• It provides a description of the cataract, meningitis, etc.
• He senses the role of rats in spreading the plague.
• It indicates that certain infections are transmitted through the placenta.
• He is the first to recommend treatments bladders ice and rectal enemas.
• It discovers that the blood from the heart to go to the lungs and then back, and sets accurately the ventricular system and the heart valves.
• It is the first to correctly describe the anatomy of the human eye.
• It also hypothesizes that the water and air contain tiny organisms vectors of some infectious diseases.

Above all, Avicenna is interested in means of maintaining health. It recommends regular sport or hydrotherapy in preventive and curative medicine. He stressed the importance of human relations in the conservation of good mental and somatic health.
“Medicine is the art of preserving health and possibly cure the disease occurrence in the body.”
During an expedition, which he belonged to the emir `Ala o-dowleh against Hamadan, Avicenna is hit by a severe intestinal crisis, he suffered a long time and contracted, it is said, following from excessive work and pleasure. Avicenna tried to cure himself, but its remedy was fatal to him. He died at the age always precocious, fifty-seven years old in August 1037 (428 AH) after leading a very hectic life full of vicissitudes, exhausted by overwork.