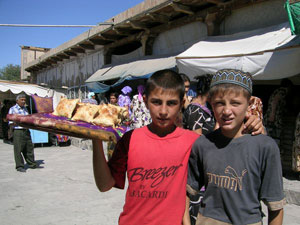 The Uzbekistan is the most populous country in Central Asia (around 34 000 000 inhabitants). Ethnic Uzbeks make about 80 % of the population. Russians present 6 % of the population, Tajiks make 5,5%, Kazakhs of 4 %, Tatars of 4 %, Karakalpaks 1,9 %, Koreans 1,1 %, as Kirghiz and Turks. Most of the Russians live in Tashkent. Tajiks are concentrated basically in the cities of Bukhara and Samarkand.

State language is Uzbek, which is spoken by 66,6 % of the population. Russian is considered the second language. Tajik is widely used in the regions of Bukhara and Samarkand.

Muslims make about 90 % of the population. Also there are representatives of other religions: Orthodoxy (9 %), Judaism, Lutheranism, Catholicism and Baptism.

The country is officialy laic. 37% of the Uzbek citizen lives in cities, 63% remaining are standing in the countryside.
Population is essentially young, workers represents 54%, retired people 7%.