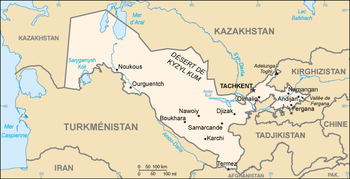 With an area of ​​447,000 square kilometers (roughly the size of Spain or California ), shared between the desert plains , basins and oases and dominated to the east by mountains , Uzbekistan stretches 1,425 kilometers from west to east and 930 kilometers from north to south. Southwest border of Turkmenistan, Kazakhstan and the Aral Sea to the north, Kyrgyzstan and Tajikistan to the east, Uzbekistan is not only one of the larger Central Asian states, is also the only one with a common border with the other four. Uzbekistan also shares a border with Afghanistan to the south.

With the Principality of Liechtenstein is the only state in the world to be doubly landlocked, which is to say, it must pass through at least two other states to have direct access to the global ocean.

Uzbekistan is a mainly desert country which only 10 % of land is used by humans (intensive agricultural crops and irrigated valleys). Kizil -Kum, one of the most extensive deserts of Central Asia, covering much of the territory west of Uzbekistan. Part of the Karakum desert also crosses the country in the southwest.

The Amu Darya and Syr Darya rivers are the most important of Uzbekistan and Central Asia and flow into the Aral Sea. The total length of Amudarya is 1437 km, the Syr Darya is 2137 km. north – east and south lay the chains Tian Shan and Hissar – Alay. The highest peak of the country is Adelunga Toghi which culminates at 4301 meters.

The climate is continental, dry and very high contrast, relatively cold in winter (down to – 30 ° in some areas), very hot in summer (+ 35 ° to 40 ° or more). Winter 2007-08 was one of the coldest in the country with temperatures reaching -50 ⁰ C, never seen in 40 years in a region with relatively mild winters.

Aral Sea, shared between Uzbekistan and Kazakhstan, suffers from a dramatic decrease in 60 years, a situation which now represents an ecological disaster for the region. Between 1960, when it covered 68 000 km ² and 2000, the area was divided by two. The current trend suggests the total disappearance of the Aral Sea in the year 2025. This is mainly due to standing water withdrawals for irrigation of cotton and grain in Uzbekistan, and greater importance in Kazakhstan. 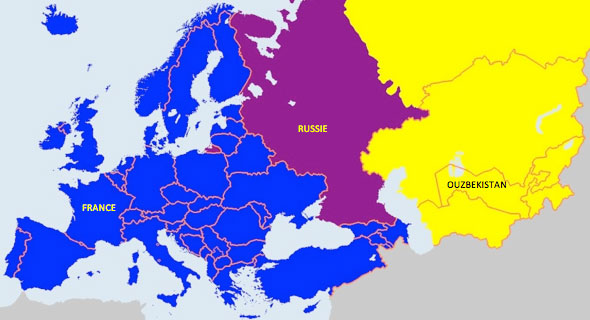 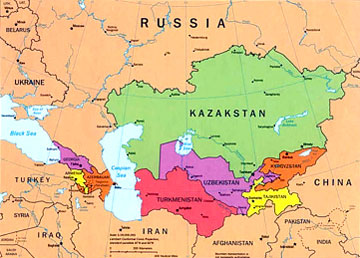