Throughout its history, the territory of modern Uzbekistan was mostly dominated by large surrounding empires of the Persians, Greeks, Arabs, Mongols and Russians to become a full-fledged state in 1991.

Early civilizations emerged in Uzbekistan were Sogdiana, Bactria and Khorezm. In the 6th century B.C., these states became parts of the Persian Akhemenid Empire.

The country was conquered by Alexander the Great in 327 B.C., when he was campaigning against Darius III . This victory ended the Akhemenid dynasty.

Between the third century B.C., and the second century AD , Sogdiana and Bactria fell into the hands of the Greco -Bactrian kingdom , nomadic people of the Yuezhi , Scythians, Parthians and Buddhist Kushan . Under Kushans, Sogdian city Samarkand became a hub of the Great Silk Road between China and Europe.

Thereafter, between the second and the sixth centuries, present-day Uzbekistan was possessed by Persian Sassanids and White Huns from the confines of China.

Uzbekistan is occupied by Turks (Köktürks) between the sixth and eighth centuries.

The Arabs, led by the troops of General Qutayba ibn Muslim conquered present-day Uzbekistan in 712 whose control was consolidated after the Battle of Talas. They established Islam among Central Asian people who were practicing Zoroastrism.

The Samanids were the first local dynasty to regain power in Uzbekistan between 819 and 1005 after the Arab conquest.

Panorama of Bukhara, capital of the empire of the Samanids in the 9th-10th centuries

The great Mongol conqueror Genghis Khan took Samarkand in 1220 by overthrowing Khoarazm – Shakhs whose reign was very short. He then bequeathed the land of Ma – wara’unNahr to his second son, Chagatai.

Amir Timur (1336-1405), known in the West as Tamerlane, born near Samarkand, has built a vast empire including several countries in Central Asia. His empire fell in 1507 at the hands dynasty of Shaybanides. Tamerlane has left behind him great cultural achievements, artistic and scientific works, mainly in Samarkand and Herat. The fifteenth century was called Timurid Renaissance, especially in the reigns of Shah Rukh, Ulugh Beg and of HusaynBayqara.

The Shaybanides, Mongolian Muslim dynasty, met in present-day Uzbekistan in 1429 under a name ulus ( Khanate ) Uzbek . It was the first time that the name “Uzbek” appears in the History; it takes the name of OzbegKhan, Mongol prince of the thirteenth century who implanted Islam within the Golden Horde. 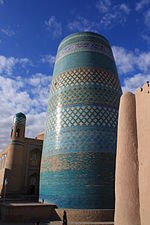 The Russians arrived in the area in the late nineteenth century, after a lightning victory of the troops of General Mikhail Chernyayev . They first submitted in 1884 the khanates of Bukhara and Khiva , and then east of present-day Uzbekistan , including Tashkent (1865) . The conquered territories were grouped together in an office called Turkestan. In March 1876, the Khanate of Kokand in its turn falls into the hands of the Russians.

Uzbekistan as a republic and as unique and separate nation exists only since October 27, 1924, when various territorial entities of Central Asia were united in the Soviet Socialist Republic of Uzbekistan. In 1925, Uzbekistan integrated the USSR.

During World War II, Uzbekistan received hundreds of thousands of Soviet families fleeing the Nazi invasion in the west, including many war orphans, which accelerated Russification of the republic, especially the capital Tashkent. Part of the heavy industries of the European part of the USSR was also evacuated. These plants remained in Uzbekistan after the war, contributing to the industrialization of the republic.

A phenomenon that has largely shaped the history of Uzbekistan in the years 60-80, was the intensive development of cotton. Intense pressure from Moscow, which encouraged them to always produce more cotton per year, pushed the Uzbek leader at the time, Mr. Sharaf Rashidov, intensify and focus the culture of this shrub. He will remain in the country’s history as a leader who has invested heavily in the development of the Republic and was able to obtain a degree of autonomy from Moscow.

Since 1990, the country is governed by the President Islom Karimov. Following the failure to sign a new agreement constituting a renovated USSR where he was an advocate, August 31, 1991, Uzbekistan declared its independence.

During the years of independence the new country expanded its presence on the international scene, joined the UN and other major international organizations, opened direct air links with many countries, began work on great urban and road reconstruction, and adopted incentives for foreign investments.